My Peloton:
Girls with Gears

I chose to be involved in Pelotonia since 2010  because my dad’s life was affected by cancer when he was 64 years old.  I watched the disease take away his strength and health within the year in 1990.  So many gains have been made in the areas of detection and treatment since that year.  Because of research, one day there will be an end to cancer as we know it.

I’m a lot older than the average rider in Pelotonia and in the past, have found the number of riders in the event quite intimidating but still I rode because I knew that together with your support, we are making a difference.

There may not be a group ride this year but there still will be a group goal to End Cancer.  Now we will see it supported with thousands of unique ways to power that goal.  I personally plan to ride, create and help others.  More details coming soon.

In the past, I rode for the strongest people I know who have personally been affected by cancer.  I rode for Peggy, Lori, Quentin, Ed, Debra, Brenda, Beth, Molly, Mrs. Deely, Fay, Jimmy, John G. and Mr. Beckett and Bill.

This is my 11th year of involvement in Pelotonia and I’m so grateful that many of you have been donating to Cancer Research through my ride as long as I’ve been riding.  Thank you for your generosity.  End Cancer! 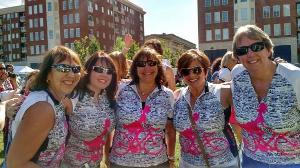