My Peloton:
Stefanie's Team of Hope

It's now more than a decade that I have been a Pelotonia rider! Thanks to my family, friends, colleagues, students/families, and many others for donating to this cause year after year. I've dedicated my ride for nine years to the same people. I almost didn't ride again this year. But this year cancer took two more incredible people whom I am compelled to ride for to end this awful disease. One is Chris Collaros, the principal of Wickliffe Progressive Elementary School. He was a mentor, a leader, colleague, and a friend. His loss is big and deep for so many. Another incredible loss was Joanie Duggar, whom I got to know through the UA Education Foundation. She was kind and giving and wonderful. She is missed by so many. For those I've ridden for during the past nine years ... I ride to honor Stefanie Spielman (my peloton was created in her honor), wife of former Buckeye and NFL player Chris Spielman, whom I knew for many years. She lost her battle with breast cancer in November 2009.  I also ride for Eileen O'Connor, the mother of a former student who passed away from ovarian cancer in 2008 and Bonnie Masdea, a student's grandmother who passed away from the same disease at the same time. Ovarian cancer is a silent killer that often goes undetected until it is too late. In November 2009, my fourth grade students, with help from another class, organized a race called BEAT MICHIGAN! BEAT CANCER! that drew 900 people and raised $23,000 for ovarian and breast cancer research. Those kids proved that anything is possible! The amazing thing? The kids who created that event in 2009 were high school seniors last year and they came back and we did the whole project again with my fourth grade students and another class of fourth graders (a class which my daughter was in)! This time these kids were able to raise $31,000 to beat ovarian cancer while again raising awareness about the vague symptoms of the disease. Being a part of that event in 2009 inspired me to do Pelotonia for the first time; I have participated every year since. Full circle! Join me in the fight to end cancer. Please support my ride by making a donation. My goal is to raise $2,000 -- so large or small, every donation will help me get closer to achieving my fundraising goal. The great thing about your donation is that 100% of your gift goes to research at the James Cancer Hospital at The Ohio State University. I appreciate your support! As Chris Spielman has said about cancer, there will be great wins and terrible losses. I ride with a fierceness this year for those recent terrible losses. Your help will enable more entries in the WIN category. Thank you in advance for your generosity and for your gift of hope to cure cancer. I greatly appreciate your support. It means a lot. Year 11 ... here we go! 100 miles to ride before I sleep! Sincerely, Katie Benton 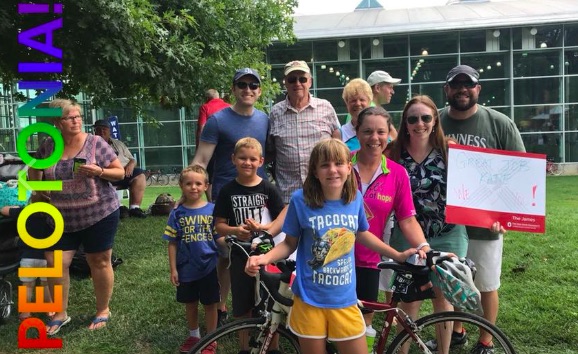