I'm gearing up for my fourth year of Pelotonia! On August 8th I'll be riding my bike to support cutting edge, life-saving cancer research.

In 10 years Pelotonia has raised over $208 MILLION for research at the Ohio State University Comprehensive Cancer Center. Last summer at opening ceremony we learned about the brand new Pelotonia Institute for Immuno-Oncology, which is being built with the first $100 million raised in the last ten years. A lot has been accomplished but the fight isn't over until cancer is cured. Until then, we ride.

I ride in honor and memory of many of my loved ones who have battled this ugly disease. It has stolen life from dear family members and friends.

Cancer doesn't discriminate. It takes people young and old, rich and poor, republican and democrat, enemy and friend. We ride for all of them. We ride for the people cancer stole and we ride so that cancer can't steal anymore. We are one team with one goal: end cancer.

In honor and memory of your loved ones, please consider donating to my ride. I believe that eventually, cancer will exist only in our history books, instead of in the people we love.

Riding in memory of:

Riding in honor of: 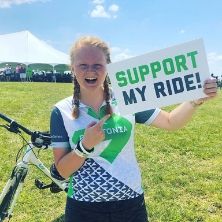