My Peloton:
Team Buckeye-Bikers for Brutus

I ride to give hope to kids fighting cancer. My son, Grant, was diagnosed with a brain tumor in 2012 when he was only 11 years old. Grant has been raised in a Buckeye family, so when he found out he had cancer he decided to name his cancer "Michigan" because if Ohio State can beat Michigan on the football field he can beat "Michigan" through chemo and radiation. Grant won his first battle with "Michigan" but in 2015 he had to fight again. This time Grant went through grueling chemotherapy and the entire family moved to Houston, Texas for a summer for a treatment not available in Ohio. But through all of the tough times, Grant persevered and he beat "Michigan" again.  Then in September of 2018 he was told that "Michigan" had returned a third time.  He fought courageously, but on February 10, 2019 he earned his angel wings.  I ride so that some day, no family will ever have to walk the journey that our family did.

So please, consider donating to Pelotonia. 100% of the donations go to cancer research right here in our backyard so that everyone can have hope.

Thank you for your donation. 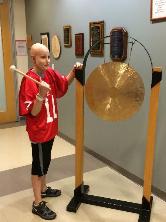