“When you die, that does not mean that you lose to cancer. You beat cancer by how you live, why you live, and in the manner in which you live. So, live. Live. Fight like hell. And when you get too tired to fight then lay down and rest and let somebody else fight for you.” - Stuart Scott

Like most people, I have warm memories of holidays from my childhood.  Like many people, those memories are rarely chronologically clear. Was 1989 the year I got Monopoly as a gift?  Or was that the year of gym socks? Did we stay home in 1991? Or did we travel to my grandparents’ for an extended family celebration?

However, Christmas of 1994 remains clear in my memory.  I remember my aunt Marilyn sheepishly explaining that she had forgotten the names she had drawn in the gift exchange.  She begged for forgiveness and promised to make it right to those whom had been shorted in the exchange due to her absentmindedness. Some lighthearted jokes were made that her 50th birthday was only a couple of years away and we moved on with our celebration.  Soon after, we learned that the situation was much more serious than we could have imagined. An MRI revealed that she had an aggressive brain tumor. The tumor would claim her life after a grueling fight before we gathered to celebrate Christmas in 1995.

It was my first real experience dealing with cancer.  Sadly, it was not my last. Ten years later I learned that my friend Bethany had a reoccurrence of a tumor on her spine that had plagued her during childhood.  After a similar fight to my aunt; Bethany would succumb to her disease also.

In July of 2014, another friend was diagnosed with breast cancer.  Melanie would face a rigorous fight of her own, but thanks to early detection and advances in treatments, she is now cancer-free and recently celebrated another 29th birthday.

My grandpa was diagnosed with colon cancer this past December.  I was privileged to spend time with him in February on what turned out to be his last birthday, and I was forced to say goodbye to him in March.

I ride because this his how I can fight, stand for those too tired to fight, and stand by those still fighting.

I ride because Aunt Marilyn deserved more than two years of being a grandmother.

I ride because Bethany deserved to see her 25th birthday.

I ride because Melanie has many more 29th birthdays to see.

I ride so that more grandsons and grandpas can celebrate more birthdays.

I ride because I believe in the power of life over death. 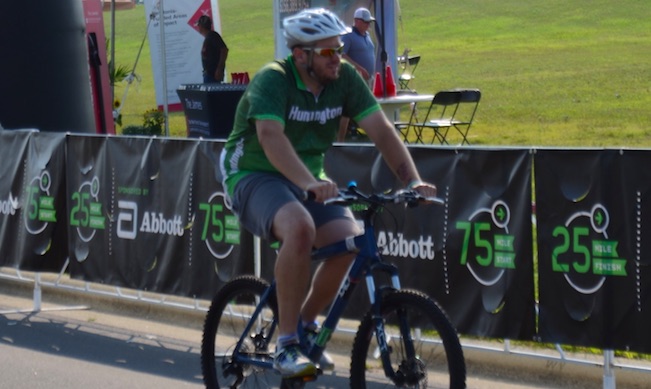