Five is my number. Not only was I born George Welty Myers V, I was also born in May (the fifth month) into a family that eventually had five boys (and two girls also). My last name has five letters and after I married my beautiful wife we had three kids for a total of five in our family. I could go on, but I'll just stop at five ;)

I see fives everywhere, which makes it strange that I never thought about the fact that my Pelotonia ride last year was dedicated to five people I know who had recently contracted different types of cancer. Marcie Holloway, Randy Flick, Terry Brandes, Jackie Piper and Tim Ladina were all on my mind as I rode last year and I have been lucky enough to follow their stories throughout the year. All five are doing well!

This year is a different year for Pelotonia as it is for everything else (this would have been my fifth ride)! No fundraising commitments necessary and no official ride. We have all been challenged to come up with our own goals so here are mine. I wanted to push myself, so at the age of 55 (appropriate right?) I am making a goal to do two things I've never done before - both in a single day! On September 5th, I am going to run 5 miles and then bike 50 miles to total my age. I plan on taking a little break between the two but this will still be a challenge for me! I will miss riding with Team Pickerington but will think of you all while I run and ride this year!

If you would like to donate to Pelotonia this year, every penny of your funds will still go straight to cancer research that will help people like those I mentioned above (and those you may know) to live longer and better lives and eventually to end cancer completely! That is what this effort and all of Pelotonia's activites are about. ONE GOAL! 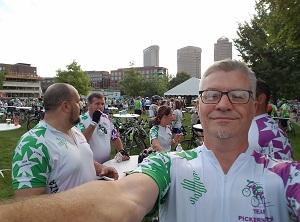