Pelotonia has been a part of my life since I was 16, even though I was halfway across the world (in the Philippines). My husband, Riley, was 15 when he rode his first 180-miles in 2009 for Pelotonia's first ride, and he's been riding 180-miles every year since.

My sister, Kace, beat thyroid cancer at 17; while Riley lost his sister, Eden, to neuroblastoma when she was only 8, so this cause means a lot to our family.

When I moved to Ohio, I was so excited to finally be a part of it - spreading awareness, promoting the fundraising, cheering at the finish line. In 2018, Riley's dad, Rourke, rode alongside Riley in memory of Eden. I decided to sign up as a volunteer so I can be more involved and, along with my husband and father-in-law, contribute to reaching One Goal: End Cancer.

Founded in 2008, Pelotonia was established with the objective to fund life-saving cancer research. Focused on a community of passionate fundraisers and centered around a three-day experience of cycling, entertainment, and volunteerism, the Pelotonia community has raised more than $157 million for high-risk, high-reward cancer research. Last year, 8,022 Riders from 39 states and 7 countries participated along with 3,576 Virtual Riders and 3,044 Volunteers. Please join me in supporting this cause, where 100% of your donation will go directly towards cancer research at The Ohio State University Comprehensive Cancer Center-James Cancer Hospital and Solove Research Institute. 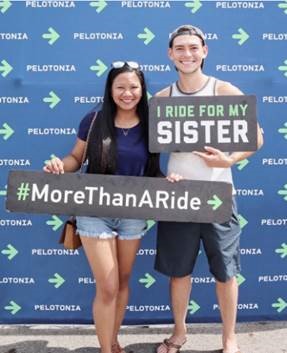