My Peloton:
Stefanie's Team of Hope

This will be the seventh year I have rode in Pelotonia. I still claim it as the best event I've ever participated in. I can't explain how many emotions I feel starting with the opening ceremonies on Friday evening and lasting all the way to the finish line on Saturday.

Last year I wrote to tell you that John was taking the year off due to his multiple myeloma diagnosis.  Shortly after Pelotonia last year in mid-August his treatments had led him to remission.  In the world of multiple myeloma this means that the cancer is undetectable.  He continues on a treatment plan for maintenance which means taking different drugs everyday and doing labs and visiting his oncologist every month.  Although the labs test for a variety of things to make sure the drugs don’t do more harm than good they also test to see if the cancer has become active again.  So we’ve almost reached that one-year mark of undetectable – what better way to honor it than ride in Pelotonia!!!!

John is also taking advantage of the “remission” by getting both of his knees replaced.  This surgery was postponed from last year but it means that he can’t ride again this year as he is currently doing rehab to recover from the surgery.  Enter Frank who is “borrowing” John’s bike to ride with me again on August 3rd.  And……  there’s more!  My brother Wayne, his daughter Tricia and son in-law Steve are riding as well.  My family is rocking it this year.

My mom died of cancer when she was only 64. She was into nature and health before it was even cool. Remember Euell Gibbons? He was one of her idols as she read his book and cooked us dandelions! My dad died of cancer eight years ago. What I remember most about my dad is that he was the kindest man on earth. I am not kidding when I say that - ask anyone who knew him. My brothers and sisters and I miss them dearly.

My sisters and brother are all cancer survivors.  I want to pay it forward to all the people who made it possible for survivors to get the care, treatment and support they needed to battle their disease.

I hope that someday our world will have the final answer to end cancer. In the meantime I will find ways to support my friends and family who are affected by this disease. Thank you to everyone who supports Pelotonia in any way and to those of you are able to contribute to my fundraising efforts! 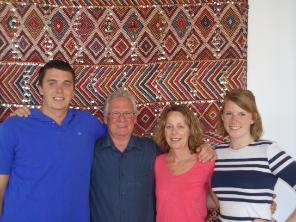