I have decided to participate this year for the ninth time in the "Pelotonia" ride, which has raised an astounding amount of money for cancer research, over $200 million its ten years of existence. Local firms pay all operating costs, so 100% of the funds go directly to cancer research at the James Hospital in Columbus, Ohio. This year I will ride 100 miles to Gambier, Ohio, and finish on the beautiful campus of Kenyon College. The ride will take place on August 8, 2020.

As I have raised money for my prior rides, I have been struck by several things. First, I never realized just how generous my friends are. If you have sponsored my ride in the past, thanks so much, and it would be wonderful if you could sponsor me again this summer.

Second, cancer is a worldwide killer that has affected many more people than I had imagined. Friends from such corners of the globe as China, Korea, India, Italy, Germany, Turkey, Canada and the United States have told me about relatives suffering from the disease in response to my fundraising emails.

This year marks the 18th since my father lost his battle with cancer.  He survived 10 years longer than the doctors thought he would, because of new treatments that slowed the progress of the disease. As I have in the past, I will dedicate my ride this year to my father's memory.

Research here in Columbus, Ohio and in other places, helped to develop the treatments that extended my father's life, and will help many other people suffering from this horrible disease. Please consider making a donation of any amount.  I promise the money will be well used. 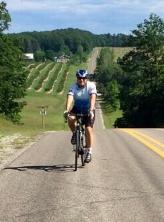